Marble… all you ever wanted to know: formation, composition, properties and uses

Marble is a metamorphic rock formed from the exposure of limestone to a very high temperature and pressure, over the years in the Earth’s crust. Limestone is composed primarily of the mineral calcite (CaCO3) and other minerals, such as clay minerals, micas, quartz, pyrite, iron oxides and graphite. Under the conditions of metamorphism, the calcite in the limestone, along with its original carbonate minerals, recrystallises to form a rock that is a mass of interlocking calcite crystals.

The impurities in the limestone during the recrystallisation process affect the mineral composition of the marble that is formed. At relatively low temperatures, silica impurities in the carbonate minerals form masses of chert or crystals of quartz. At higher temperatures, the silica reacts with the carbonates to produce diopside and forsterite. At very high temperatures, rarer calcium minerals, such as larnite, monticellite and rankinite, form in the marble. If water is present, serpentine, talc and certain other hydrous minerals may be produced. The presence of iron, alumina and silica may result in the formation of hematite and magnetite.

The minerals derived from impurities give marble a wide variety of colours: the purest calcite marble is white, marble containing hematite are red(dish), marble that has limonite is yellow and marble with serpentine is green.

Marble must be mined with care. The rock may shatter if explosives are used. Channeling machines are utilised to cut grooves and holes in the rock. Miners outline a block of marble with rows of grooves and holes. They then drive wedges into the openings and separate the block from the surrounding rock. The blocks are cut with saws to the desired shape and size.

How does marble form?

Typically marble forms at convergent plate boundaries where large areas of Earth’s crust are exposed to metamorphism or by contact metamorphism when a hot magma body heats adjacent limestone or dolostone.

Before metamorphism, the calcite in the limestone is often in the form of lithified fossil material and biological debris. During metamorphism, this calcite recrystallises and the texture of the rock changes. In the early stages of the transformation the calcite crystals are very small: in a freshly-broken hand specimen, they might only be appear as a sugary sparkle of light reflecting from their tiny faces when the rock is played in the light.

As metamorphism progresses the crystals grow larger and become easily recognisable as interlocking crystals of calcite. Recrystallisation obscures the original fossils and sedimentary structures of the limestone. It also occurs without forming foliation, which normally is found in rocks that are altered by the directed pressure of a convergent plate boundary. 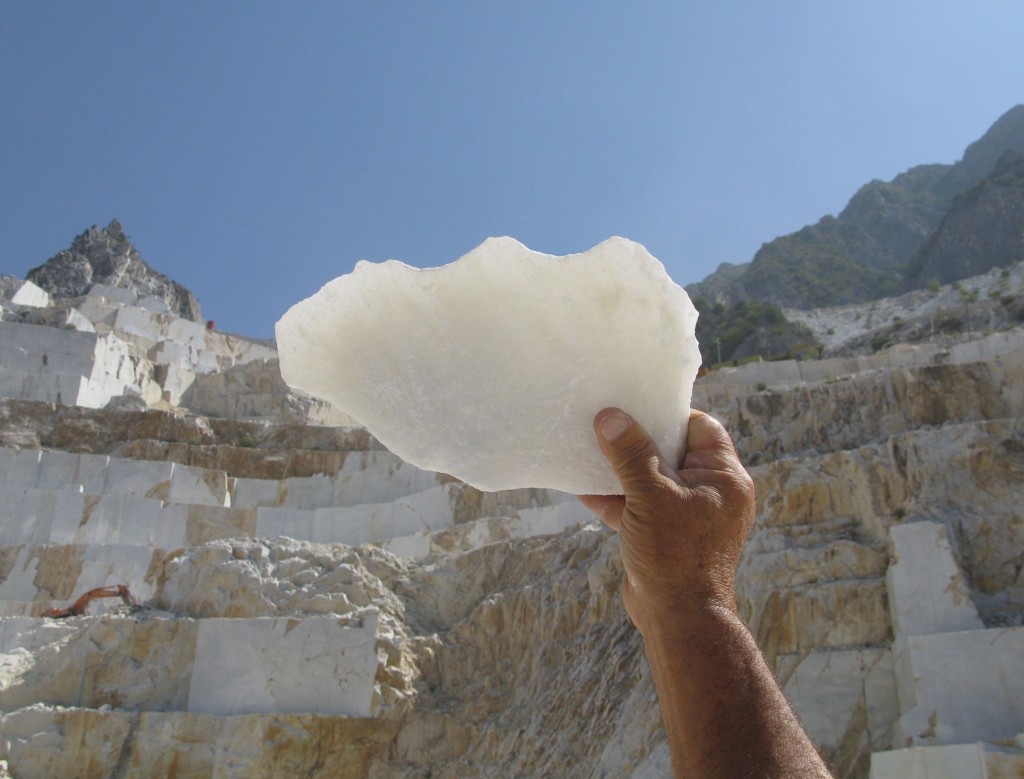 Marble has always been highly valued for its beauty, strength and resistance to fire and erosion. At the same time it is soft enough to be used for statues and artefacts. The ancient Iranian and Greeks made large use of it for buildings and statues. The Italian artist Michelangelo used marble from Carrara in a number of sculptures. The Taj Mahal – one of the most beautiful and famous buildings in the world – was built between 1632 and 1653: marble was extensively used throughout the building, including the marble domes and towers.

Today, marble is used for a wide variety of purposes, much wider than most people think. Very pure calcite marble is used for statues and sculpturing. Small pieces of marble are crushed or finely ground to be used – for their chemical properties – in pharmaceuticals, as abrasives in soaps and similar products. Marble is also used for its optical properties in cosmetics, paint and paper. Crushed or ground marble is also used in paving roads and in manufacturing roofing materials and soil treatment products.

Finally, large blocks of coloured marble are used for decorative and architectural work, including columns, floors and other parts of buildings, furniture and outside spaces.

If you have any question or want to find out more about this fascinating materials, contact us now!